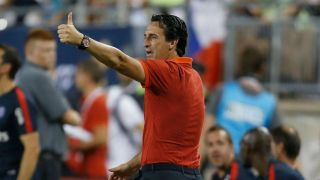 Unai Emery was content with Paris Saint-Germain's International Champions Cup win on Wednesday, but acknowledged Real Madrid are somewhat behind in their preparations.

PSG ran out 3-1 victors at Ohio Stadium thanks to Jonathan Ikone's early goal and Thomas Meunier's brace, while a Madrid side missing Cristiano Ronaldo, Gareth Bale and Karim Benzema could only reply through Marcelo's penalty.

The game marked PSG's third pre-season friendly, while for Madrid it was a first outing since their Champions League triumph against Atletico Madrid at the end of May.

And Emery, while satisfied with the success, was not reading too much into the result as his squad prepare for their first major action of the season in the Trophee des Champions against Lyon on August 6.

"Pre-season results logically depends on circumstances, you don't always have some players," he said.

"You can't appreciate really well the game of any of the two teams.

"Today they returned to work, we won and we played in phases like we want. Of course Real Madrid are still lacking some things.

"PSG wants to do important things and find a dimension to fight against the best teams, I'm happy with the club and it is a challenge for all.

"Our squad is [close to] 90 per cent [ready]. The priority is to be [100 per cent] ready in 10 days. Each team has different physical conditions.

"We can't value this match only with the result. Teams have to be ready for the competition and PSG and Real Madrid are working."