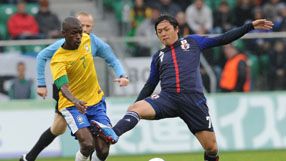 A double from Neymar and further goals from Paulinho and Kaka inflicted Japan's worst defeat under Italian coach Alberto Zaccheroni and Endo was typically frank in his assessment.

"It shows we lack that bit of edge and accuracy in front of goal," he told Japanese media on Wednesday.

"We know we can still be on the end of big defeats like this but we can still improve and we're capable of making more chances."

The 32-year-old, who made his Japan debut against Argentina in 2002, surpassed former defender Masami Ihara's 122 caps in the friendly.

"It's a great honour," Endo added. "I hope I can keep playing and keep improving as a player."

There was no repeat of Japan's shock 1-0 win over France last Friday, however, as the Asian champions were totally outplayed by five-times World Cup winners Brazil.

Manchester United's Shinji Kagawa, who scored the winner against France, said: "We did make one or two chances but the difference was Brazil turned their chances into goals."

Japan were using the two games against France and Brazil to warm up for their World Cup qualifier away to Oman on November 14.

"The purpose of the games was to see how Japan could cope with the best teams in the world," Zaccheroni said. "They are in a different class but the result was disappointing."

"If you look at the score it looks like a big defeat," he said. "We gave away a couple of soft goals."