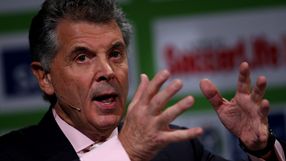 The tactic is intended as a damage limitation exercise following last month's allegations by the Sunday Times which led to the suspension of two executive committee members for allegedly offering to sell their votes.

The letter, a copy of which has been seen by Reuters, is signed by the bid's international president David Dein (pictured) and bid chairman Geoff Thompson, himself a member of the executive committee.

The letter emphasises the bid team have no control over the media.

"In recent weeks the role of the British media and its relationship with both FIFA as an organisation and the individual members of the FIFA executive committee has come under the spotlight," the letter said.

"There has been significant speculation as to the effect that this might have on our bid.

"We hope England's bid will not be judged negatively due to the activities of individual media organisations, regardless of one's view of their conduct.

"We hope you appreciate that we have no control over the British media."

The letter also reassures members that they are unlikely to become the target of future British media campaigns.

"Concern over what the future might hold for FIFA and its relationship with the British media if we were to be successful should also be dismissed.

"We are sure that FIFA would receive a positive reception."

The bid team have also tried, so far in vain, to prevent the broadcast of a documentary by the BBC's Panorama current events programme, due to be televised shortly before FIFA decides which countries will host the 2018 and 2022 finals on December 2.

The programme is also expected to question FIFA's ethics, but the letter says the claims refer to old allegations which have long been dealt with.

"It is now public knowledge that we have made representations to the BBC regarding a forthcoming documentary they are planning.

"We are alerting you to the fact the programme appears in part to be raking over allegations some of which are up to 10 years old and have already been formally dealt with by FIFA and the Swiss courts."

Their cases are being dealt with by FIFA's ethics committee which meets in Zurich from Monday with a decision expected on Wednesday.

FIFA president Sepp Blatter recently questioned the methods used by the Sunday Times - whose reporters posed as lobbyists for an American consortium - saying they had set traps.

England's opponents to host the 2018 tournament are Russia and joint bids from Spain/Portugal and Belgium/Netherlands.