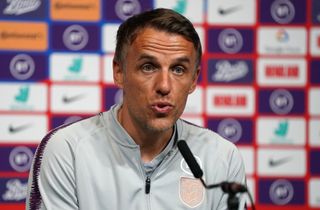 The Lionesses clinched a scrappy victory in Lisbon to ease the pressure on Neville, but Beth Mead’s late winner was gifted by a blunder from Portugal goalkeeper Patricia Morais.

England lost to the USA in the World Cup finals last summer and since their third-place play-off defeat to Sweden they have drawn in Belgium and been beaten by Norway and Brazil, who won 2-0 at the Riverside on Saturday.

Wasn’t pretty but we got the win! 👊🏻Lots of positives to take away from the last 10 days! Honoured to have had my first start for the @lionesses 🦁 Proud of the team 🏴󠁧󠁢󠁥󠁮󠁧󠁿 pic.twitter.com/MlyQ2aK1sx— Bethany England (@Bethany_Eng15) October 8, 2019

“The players were determined to win and we got the luck we haven’t had in the last five games,” Neville was quoted as saying by the BBC. “The performances over the last two games have been outstanding.”

“And for me personally, in terms of what I’ve seen at this camp, it’s been my most enjoyable camp since I’ve been a manager with this England team.”

England dominated possession against a side 23 places below them in FIFA’s rankings, but failed to play with cohesion or intensity for long periods.

Make sure you're part of our next game. It's going to pretty amazing 🥳https://t.co/dYYCukMw9o— Lionesses (@Lionesses) October 8, 2019

Neville, appointed to the role in January 2018, said on Monday that he did not fear for his position.

“We said before the game that a lot of people are saying this is a must-win game. For us every game is like that, every game we want to win, that’s the mentality of these players,” he added.

“There were some outstanding performances and I think we’ve seen one or two cement their place at Wembley.”

Next up for the Lionesses is a friendly against Germany at Wembley on November 9.