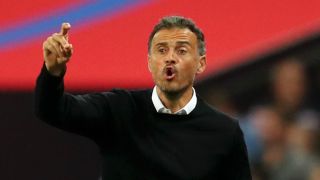 Defender Marc Bartra believes Spain head coach Luis Enrique has instilled a sense of calm in the national side.

Spain's 2018 World Cup campaign was thrown into disarray when coach Julen Lopetegui was sacked two days before their opening game for signing a contract to take over at Real Madrid.

Fernando Hierro was installed at short notice, but was only able to steer the 2010 world champions to the last 16, where they were dumped out by hosts Russia.

Enrique was appointed coach in July and boasts a 100 per cent record thanks to Nations League wins over England and Croatia and Thursday's 4-1 friendly victory against Wales.

Spain face England again on Monday and Bartra – who scored his maiden international goal against Wales – has praised Enrique for turning the side's fortunes around.

"He is a coach who is in control of all the tactical aspects and has won many titles," the Real Betis man told a media conference.

"The fact he was at such a demanding club [Barcelona] means you have to be 100 per cent focused. The national team now has another rhythm, it is calmer.

"We can see the ambition and hunger that the coach has.

"We have a compact, aggressive team with a good atmosphere on a daily basis. They are a great group of footballers and people."