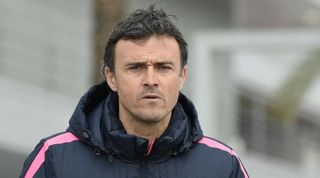 The Catalan giants missed the chance to return to the top of La Liga at Camp Nou as Juanmi capitalised on a Dani Alves error to score the only goal in the seventh minute.

With Real Madrid playing on Sunday, the defeat could see Barca fall four points behind Carlo Ancelotti's side, and Luis Enrique had no complaints after a lacklustre display.

"This was a game of mistakes," said the coach. "And mistakes cause defeats.

"It is the responsibility of the players, but most of all of the coach. It is the same for when we perform well.

"Sometimes the rival is effective and they capitalise on their chances, sometimes they just don't.

"These kind of results prove that you should never underestimate your opponent.

"When you minimise their weapons, something we have done quite a few times this season, that's something to appreciate. But other teams have their qualities too.

"So that together with our not-so-good interpretation of the game and Malaga's effectiveness, in the end we deserved to lose."

The defeat was Barca's first in the league since January 4, and fourth of the campaign.