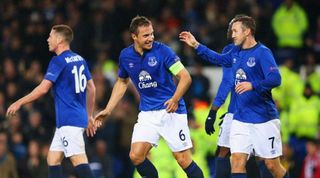 A goal in each half from Romelu Lukaku and Kevin Mirallas at the VfL Wolfsburg Arena on Thursday ensured Roberto Martinez's side progressed as group winners.

The Premier League side still have one group game to come against Krasnodar at Goodison Park and captain Jagielka believes there is more to come from the Merseyside club in Europe.

He told the Liverpool Echo: "We knew it was going to be a tough group from the draw but we've done a really professional job from day one. We started with a win and then cemented our place (on Thursday).

"A draw would have seen both teams through anyway but the game wasn't played that way. Both sides wanted the win. The tactic we used on the counter attack worked really well in the end.

"We're confident in ourselves to go and do big things. We can go really far in this competition. It will be hard, we've qualified well but in the next round a few big boys drop in from the Champions League which, if anything makes the competition even stronger.

"It will be an interesting next few weeks. We still have a game to play and hopefully we can finish off in style at home and look forward to the draw."

Everton now turn their attention to facing Tottenham, who also qualified for the knockout stages of the Europa League on Thursday, in a Premier League clash at White Hart Lane on Sunday.