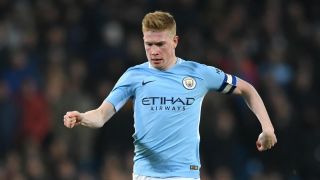 Kevin De Bruyne does not believe being given the Manchester City captaincy will have a negligible impact on his performances for the club.

De Bruyne has been the outstanding player in the Premier League this season, helping City to build a mammoth 15-point lead at the top of the table.

With senior players Fernandinho and Sergio Aguero named among the substitutes, De Bruyne wore the armband and put in a captain's performance in a 2-1 City win.

De Bruyne struck the equaliser before Aguero headed in a stoppage-time winner and, while the Belgian playmaker does not think the captaincy is crucial, he acknowledged it is a reward for his performances.

"I always try to play the same," De Bruyne - who has six Premier League goals and nine assists this season - told City's website.

"I don't think it changes that much. Everybody has to take their responsibility on the field.

"We see it is more of a sign of trust but I try to do the things I do good and tried to change the game in the second half."

Victory over the Robins extended the unbeaten run of Pep Guardiola's side to 32 domestic games ahead of Sunday's trip to Anfield, but City have not won away at Liverpool in any competition since 2003.

City's chances of completing a quadruple and matching Arsenal's 'Invincibles' in going the whole Premier League season unbeaten have been subjects of debate this season.

De Bruyne believes a poor record at Anfield will not matter in their quest for those aims, with City having hammered Liverpool 5-0 at the Etihad earlier in the season after Sadio Mane's red card for a high tackle on Ederson.

"We don't care about that," De Bruyne said. "It is just the way football goes. Even with our unbeaten run, we go there to win the game.

"They will have a very strong team. They want to be there for the Champions League. We just try to do the things we do good and then we will see what happens.

"We have five days' rest now, that will be good. It will be nice to have five days and then almost a week before Newcastle to get a little bit of recovery."