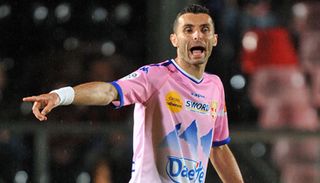 "Perhaps there was some good in the Bordeaux defeat because we now know what we should not do," midfielder Cedric Barbosa (pictured) told reporters.

Though Girondins Bordeaux are the favourites, Evian gained confidence by eliminating French champions Paris Saint-Germain in the quarter-finals.

"They have more experience but it's a final and there are upsets. The proof is that we did it in the quarter-finals against PSG," Barbosa said.

Evian and Bordeaux finished 16th and seventh respectively in Ligue 1 and victory at the Stade de France would give them a direct spot in the Europa League group stage.

"It's the only French trophy missing from my collection," defender Benoit Tremoulinas, a Ligue 1 and League Cup champion with Bordeaux in 1999, told the French federation website.

Evian coach Pascal Dupraz should have a full squad to pick from while Bordeaux are expected to be without striker Diego Rolan, who has had an ankle injury.