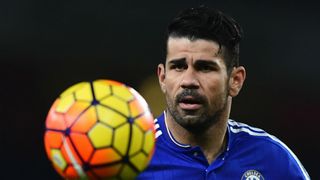 Arsenal's Premier League title bid was dealt a blow as Chelsea left north London with a 1-0 win thanks to Costa's 23rd-minute strike.

Five minutes before the decisive goal, Arsenal defender Per Mertesacker was sent off for a professional foul on Costa, although replays showed contact between the pair to have been minimal.

The Spain international was involved in an altercation that saw another Arsenal centre-back, Gabriel, sent off during a 2-0 win for the reigning champions at Stamford Bridge in September.

Costa received a retrospective three-match ban for a clash with Laurent Koscielny during that match and Hill-Wood is deeply unimpressed by his on-field conduct.

"He is a serial cheat and he gets away with it," Hill-Wood said to the Daily Star. "I think he deliberately ran in front of Mertesacker, who hardly touched him.

"Yet Costa rolls around as if his legs have been cut off. Once the red card's been shown, he's suddenly perfectly all right again.

"That's because there's absolutely nothing wrong with him. There certainly wasn't soon after when he scored that goal.

"Personally I think the referee should have sent him off for diving. It's very annoying because to me it is blatant."