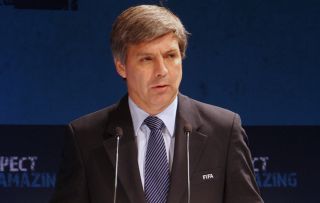 The Chilean administrator, who produced the report on all bids' sustainability prior to the controversial vote in 2010, said he believed the best option for the majority of parties would be a May-June tournament for the 2022 showpiece.

Speaking in London on Wednesday, Mayne-Nicholls said his report had clearly showed the flaws with the Qatari bid, with high temperatures the main problem for players and fans alike.

"As you can see clearly there were some problems with Qatar," Mayne-Nicholls said.

"On the operational (side) there was a big risk.

"The main risk is (having) just one city for 64 games and earthing that means.

"With the teams' training we had another risk.

"They wanted to cool down all the 32 fields for all the teams and the referees and of course, we think in case someone is training and the machine breaks and you can't cool down the pitch.

"That would be a big problem for the teams."

Although no longer employed by football's governing body, Mayne-Nicholls has proposed to FIFA three alternatives to the traditional June-July timeslot.

A switch to May-June would see games played at night, avoiding the need for additional cooling technology.

An October-November tournament is thought to be favoured by FIFA President Sepp Blatter, while a January-February switch may better suit European nations.

"We need to have a scientific analysis of this. It's not because I feel warm or you feel cold. I think we must really investigate."

A FIFA taskforce has already been established to determine the best date for the competition, but will not report until after the 2014 World Cup.