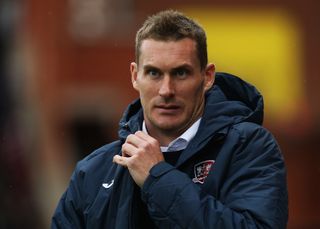 Exeter boss Matt Taylor has revealed the club are close to making two defensive signings but admitted the finances may not be in place for many more arrivals this summer.

Taylor has made the backline the priority following the release of eight players at the end of the season – with Dean Moxey, Craig Woodman, Aaron Martin and Lee Holmes among those to go – and is hoping to have two additions in time for pre-season training next week.

“We’ve sent out two contracts which have been agreed verbally but not signed as yet,” he said on the club’s YouTube channel. “I’d be really pleased if we can get those over the line in the next few days and have something to feed back to the fans.

“Hopefully those two players would be available to start next Thursday in terms of pre-season, bearing in mind they’ve got medicals to pass and a few details to finish off, but they’re both in defensive positions so that should bolster the backline.”

But asked if more players would be joining in the coming weeks, Taylor added: “It will all depend on finances. There are various ways money can come into the club and the cash flow can increase, but until that happens our hands are tied to some extent.

“The club is still in a precarious situation on the back of Covid and that’s something we’re keeping an eye on.”