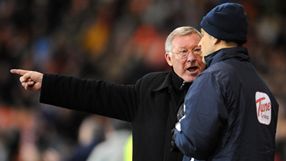 "The charge relates to comments made about match official Martin Atkinson in post-match interviews following Manchester United's fixture with Chelsea at Stamford Bridge on Tuesday," the FA said on its website.

Ferguson criticised Atkinson after Chelsea came from behind to win the game with a Frank Lampard penalty awarded after Chris Smalling was ruled to have tripped Yuri Zhirkov.

Fergsuon was also angry that Chelsea's Brazilian defender David Luiz, who volleyed the equaliser, escaped a red card after a second-half challenge on Wayne Rooney.

"It was a major game for both clubs and you want a fair referee," Ferguson said in an interview after the game. "You want a strong referee anyway and we didn't get that.

"I don't know why he's got the game. I must tell you, I must say that when I saw who was refereeing, I feared the worst."

The defeat, United's second in the Premier League this season, blew the title race wide open with Ferguson's side still four points above Arsenal who now have a game in hand.

Ferguson has until March 8 to respond to the charge.