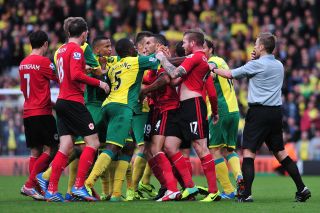 Cardiff players were incensed after Norwich's Leroy Fer put the ball into the back of the net when the Welsh side were expecting him to pass back to goalkeeper David Marshall.

The visitors had kicked the ball out of play so Norwich midfielder Alex Tettey could receive treatment in injury time.

A confrontation between the two sets of players ensued before the goal was ruled out by referee Mike Jones, who claimed he had not restarted play.

An FA statement said: "Both Norwich City and Cardiff City have been charged by The FA for failing to ensure their players conducted themselves in an orderly fashion.

"It follows an incident which occurred in or around the 94th minute of their fixture on Saturday October 26, 2013.