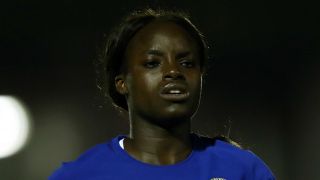 Martin Glenn has denied asking Eniola Aluko to release a statement saying the Football Association is not institutionally racist after the England women's international accused the organisation's chief executive of behaviour "bordering on blackmail".

Aluko and Martin Glenn were giving evidence to a parliamentary committee on Wednesday in relation to the FA's handling of the Mark Sampson affair.

Sampson was sacked as England manager last month on account of "inappropriate and unacceptable" behaviour with female players in a previous role.

That controversy emerged after the 35-year-old was cleared of wrongdoing by an internal inquiry and an initial report by independent barrister Katharine Newton with regards to discrimination allegations made by England players, including Aluko.

But new findings submitted to Newton meant Sampson was shown to have made remarks that were "discriminatory on the grounds of race" towards Aluko and international team-mate Drew Spence.

The FA issued an apology to both players as Aluko faced the Digital, Culture, Media and Sport select committee on Wednesday.

The 30-year-old, who has been capped 102 times by England but has not made an international appearance since airing her grievances with Sampson, said she felt "vindicated" by the apology.

But a string of potentially damaging revelations followed for the national governing body, not least her accusation that Glenn requested a statement that she "categorically refused to write" when a settlement of £80,000 for the player was being discussed.

He told the committee: "On August 30 Eniola tweeted: 'At least we now know the FA's stance on derogatory racial remarks by an England manager. Ignore, deny, endorse. In that order'.

"We took legal advice on that and the advice we received was that was a clear breach of the agreement we had both entered into.

"I sought a meeting with the PFA and Eniola on September 11 and what I was seeking to do was break this impasse.

"Eniola used words like, 'I'd like to draw a line under this'. My question to her was, 'We have to put this to bed'."

Asked if he denied asking Aluko to write the statement absolving the FA of institutional racism, Glenn said: "Her point was, 'This is just one tweet, I didn't mean how it was interpreted'. So I said, 'Let's, on this issue, get down the facts about what you think is the case about the FA'."

Glenn added that the FA would "reflect" on whether Eluko would receive the remainder of the settlement money.

Speaking to the committee earlier, Chelsea forward Aluko said: "Martin Glenn said if I wrote a statement he would release the second tranche of the money. I felt that was bordering on blackmail.

"I categorically refused to write it. It's not for me to come up with that determination.

Gruelling day but grateful to share my experience hoping to generate change. It has to happen now!Thanks so much for the supportOctober 18, 2017

Pleased with the findings of Katharine Newton's 2nd investigation. If proper processes & transparency are applied, the truth is the result.October 18, 2017

"I would never say the FA are institutionally racist. My comments were based on comments to me and Drew Spence and how they handled that.

"For Martin Glenn to say I should say that in order to get a payment I was contractually agreed to is appalling."