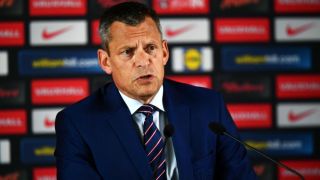 The new England manager must not be a "short-term mercenary", Football Association chief executive Martin Glenn has said.

The FA has this week been interviewing candidates to succeed Roy Hodgson, who stepped down after England's Euro 2016 exit at the hands of Iceland.

Sunderland manager Sam Allardyce remains the favourite to take charge, though Hull City boss Steve Bruce is also a leading contender, with the club confirming on Tuesday that he had held talks over the role.

Glenn refused to put a time scale on a possible announcement but stressed the importance of appointing a candidate who is prepared not only to develop the senior side, but to help rising stars in the youth teams to progress to the top.

"It's only been three weeks since the hunt started. We're making good progress, we're clear on what we're looking for and encouraged by what we've seen," he told Sky Sports News.

"We're after the best man for the job. It's the manager of the England national team, you've got to get it right and make sure you've covered all the alternatives. I can't be specific on a timetable, we just want the right choice.

"Everyone we've spoken to is massively enthusiastic about the prospects for England. There were a lot of good things about the Euros until the Iceland game. We've got a talented young squad, so it's really someone who's going to take that forward.

"We're not after a short-term mercenary, someone who will do the job for a couple of years. I want someone to come into the role, really work with not just the senior team but the younger teams and knit all that together."