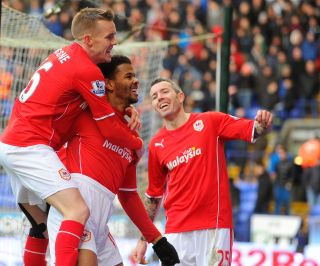 Campbell, who came off the bench to provide the decisive strike in a 2-1 win at Newcastle United in the last round, repeated the trick at the Reebok Stadium, scoring the only goal of the game to send his side through to the fifth round for the first time in four years.

The former Sunderland man tucked the ball home from a tight angle in the 50th minute after Andy Lonergan failed to deal with a cross from Craig Noone, another substitute.

Bolton were unable to find a leveller as they attempted to put last week's embarrassing 7-1 defeat at Reading behind them.

Dougie Freedman made three changes from that game as Chris Eagles, Mohamed Kamara and Craig Davies all returned.

Cardiff, meanwhile, brought in six fresh faces. Magnus Wolff Eikrem made his maiden start for the club while Andreas Cornelius and Joe Mason, who spent eight games on loan at Bolton earlier in the campaign, featured from the off for the first time this season.

Neither goalkeeper was stretched in an uneventful opening half, Lonergan comfortably tipping Cornelius' deflected shot over the crossbar in the seventh minute.

In first-half stoppage time, Bolton's Lee Chung-Yong sent a left-footed volley a yard wide after a loose ball had dropped to him inside the area.

Ole Gunnar Solskjaer made a double substitution at the break, Campbell and Noone replacing Cornelius and Eikrem, and it paid almost immediate dividends as Cardiff took the lead.

Alex Baptiste got his head to Noone's cross from the right and the ball was spilled by Lonergan to the feet of Campbell, who swivelled and swept home into an empty net from close to the byline.

Campbell wasted a chance to double his side's advantage within six minutes, heading over from four yards after Lonergan once again struggled to deal with a ball into the box.

Marshall then had to scramble to his right as Davies' cross was deflected towards goal in the 62nd minute.

Five minutes later Marshall was called into action again, flying to his right as Ben Turner deflected Baptiste's cross with his outstretched leg.

Lonergan saved from Kim Bo-Kyung in the final minute but it mattered little as Cardiff held on for their second win under Solskjaer, both of which have come in the FA Cup.

Freedman's side have just one win from their last six matches in all competitions.