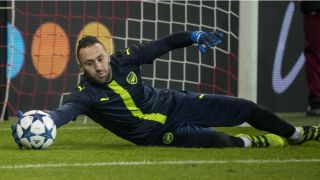 Arsene Wenger has named David Ospina in goal for Arsenal in the FA Cup final, with Petr Cech dropping to the bench against his former club Chelsea.

Colombia international Ospina has been Arsenal's regular cup goalkeeper since Cech joined from Stamford Bridge at the start of last season, but missed the semi-final win over Manchester City due to a back injury.

Cech started that game, but Wenger has opted against going with his major final pedigree despite being forced to field a make-shift defence.

Captain Laurent Koscielny (suspension), Gabriel (knee) and Shkodran Mustafi (concussion) all miss out, meaning a first start of the season for former Germany international Per Mertesacker.

Rob Holding and Nacho Monreal complete the back three alongside the former Germany international, with Alex Oxlade-Chamberlain back from a hamstring strain to start at left wing-back.

Chelsea line-up as expected, with the recognisable starting XI from their Premier League triumph now training their sights on double glory.

John Terry could still make the 718th and final appearance of his Chelsea career after the outgoing club captain was named on the bench by Antonio Conte.