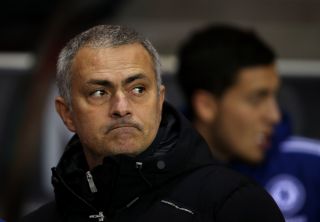 The Portuguese lifted the famous trophy during his first spell in charge at the London club when Manchester United were beaten at Wembley in 2007.

Aston Villa boss Paul Lambert on Thursday claimed he could do without the FA Cup and insisted other Premier League managers would agree with him, as staying in the top flight is the main priority.

Mourinho does not echo the Scotsman's sentiments as he prepares for his first game in the world-famous competition since he returned to England.

"I don't agree with Paul Lambert," Mourinho said. "He has the right to express his opinion and think differently to me. I have the same right.

"But especially for teams without European competition, where FA Cup matches come in a normal weekend, I don't see a reason for clubs to not try to win it. Even the smallest clubs.

"It may be difficult for them to reach the final but the FA Cup has a special feeling and meaning.

"I won lots of trophies but to win FA Cup at Wembley and feel what that means was one of the high moments in my career. I have a good feeling for the competition and the good things this country has in terms of football. I think we have to keep them."

Mourinho's Chelsea side are in good shape ahead of their trip to Championship high-flyers Derby, having won their last three games.

The visitors will be without Frank Lampard (muscular injury) Branislav Ivanovic (knee) and Marco van Ginkel (knee), but David Luiz is back from suspension.

Mourinho revealed that he had not decided whether Mark Schwarzer or Petr Cech will start in goal.

Derby suffered their first defeat in 10 games when they lost 1-0 at home to Wigan Athletic on New Year's Day.

Steve McClaren has worked wonders since returning to the club and the former England boss has urged his young side to enjoy the occasion.

He said: "It is going to be very difficult for our players, Chelsea have a great team and have come into some good form.

"It will be a big test for our players, but they have got nothing to lose and they should relish the challenge."

Johnny Russell will not feature after suffering a fractured cheekbone against Wigan and the forward joins skipper Richard Keogh (knee) on the sidelines, while influential midfielder Craig Bryson (dead leg) is a doubt.