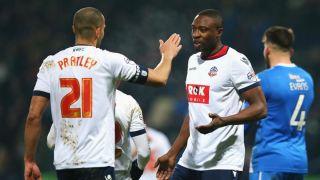 Darren Pratley spared Bolton Wanderers' blushes as his strike saw the Championship side finally edge past non-League Eastleigh 3-2 in their FA Cup third-round replay at the Macron Stadium.

The Championship’s bottom club - currently in the midst of financial difficulties - must have feared the worst when Joe Partington's wonderful individual effort put Eastleigh ahead after 11 minutes.

Goals from Gary Madine and Dean Moxey turned the game in Bolton's favour but they were pegged back once again when Kaid Mohamed equalised following a neat move just before half time.

However, the superiority of Neil Lennon's men finally told as Pratley slotted home what proved to be the winner 13 minutes into the second half following a neat one-two with Shola Ameobi, setting up a fourth-round clash with Leeds United.

League Two Portsmouth managed an upset as they saw off an under-strength Ipswich Town 2-1 at Fratton Park thanks to goals from Gary Roberts and Marc McNulty while Ciaran Clark and Idrissa Gueye helped Aston Villa past a stubborn Wycombe Wanderers side 2-0 at Villa Park.

Following a 1-1 draw at Adams Park 10 days ago, it took Remi Garde's men until the 75th minute to break the deadlock through Clark’s header before substitute Gueye ensured a much-needed win for the Premier League's bottom side.

There were no such problems for MK Dons, who set up a tie with Premier League champions Chelsea by beating near-neighbours Northampton Town 3-0 at Stadium MK.

Elsewhere, Carlisle United will play Everton in the fourth round after prevailing 5-4 on penalties in a feisty affair with Yeovil Town at Huish Park that saw Andrew Lacey and Luke Joyce dismissed in extra time.

The night’s other encounter was also decided by a shootout, as 10-man Bury sent Bradford City out 4-2 on penalties following a goalless 120 minutes at Valley Parade.