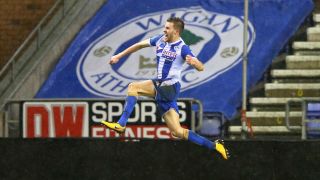 Bournemouth became the latest Premier League side to be dumped out in the FA Cup third round, suffering a heavy defeat at the hands of League One side Wigan Athletic, although Chelsea survived penalty drama against Norwich City.

The Cherries had drawn 2-2 at home against Wigan in the initial tie but despite Eddie Howe naming a strong side, they collapsed to a 3-0 loss at the DW Stadium on Wednesday.

Sam Morsy opened the scoring in the first 10 minutes, with Dan Burn and Callum Elder on target after the break - the latter with his first goal for the club - to wrap up a comprehensive victory for the 2012-13 champions.

Bournemouth have been knocked out by lower-tier opposition at the first hurdle two seasons in a row, Howe's men having gone down 3-0 at Millwall in the third round last year.

Chelsea needed penalties to get through their replay at home to Championship side Norwich City, with Pedro and Alvaro Morata having been sent off.

With VAR in use, referee Graham Scott booked Willian, Pedro and Morata for simulation, with the Spanish pair receiving second yellow cards during a 1-1 draw at Stamford Bridge - Morata being dismissed for dissent after he was adjudged to have dived.

Chelsea looked to be cruising into round four thanks to Michy Batshuayi's goal, only for Jamal Lewis to force an additional 30 minutes by scoring in the fourth minute of added time.

Willy Caballero, Manchester City's penalty hero in the 2016 EFL Cup final, saved from Nelson Oliveira and the Premier League side converted all five of their kicks to progress, Eden Hazard sending Chelsea through to face Newcastle United in the next round.

20 - have progressed past the third round in each of their last 20 seasons - the longest current run in the competition. Breeze.January 17, 2018

Swansea City moved into the fourth round with a 2-1 home win against Championship leaders Wolves.

Jordan Ayew opened the scoring for the Swans and after Diogo Jota levelled, Wilfried Bony struck to set up a trip to Notts County.