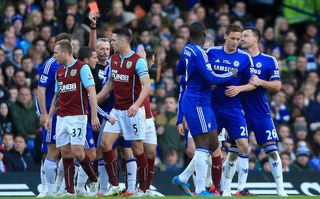 Matic was sent off for his reaction to Barnes' heavy tackle, but the FA confirmed there would be no further action taken against the Burnley man.

"FA clarification on the incident involving Burnley’s Ashley Barnes and Chelsea’s Nemanja Matic to follow," read the first of five tweets from the FA.

"In the vast majority of challenges for the ball, no retrospective action is taken as the incident has been seen by the match officials.

"Retrospective action introduced as deterrent for ‘off the ball incidents’ [e.g. kicks, stamps etc.] committed out of sight of officials.

"[The] whole game in agreement that, in vast majority of cases, match officials are best-placed to deal with incidents to avoid re-refereeing.

"In line with this rationale, FA confirm no further action in relation to Ashley Barnes as incident was seen by the officials."