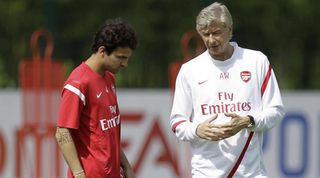 Wenger signed the midfielder when he was just 16 in 2003, and made him the Gunners’ youngest-ever player just six weeks later against Rotherham in the League Cup.

The Spaniard went on to make 303 appearances for Arsenal before re-joining Barcelona after eight years in north London, and admits his career would have taken a very different path without the Frenchman’s guidance.

“Arsene Wenger was probably the most important [manager] because he gave me the chance – the real chance that everyone needs and everyone wants," he told FourFourTwo. "After that it’s up to you to prove whether they are right or wrong.

“He gave me the chance. He took me when I was only 16, made me a better player, a better person, and was like a second father with the way he treated me. It’s not normal nowadays in football because everything is so fast and everyone is so impatient. You need results now.

“So for that Wenger is a special manager, a special person, and I know without him I wouldn’t be here right now.”