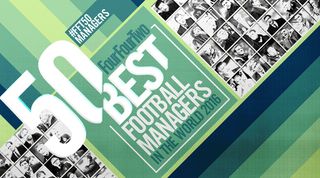 Napoli’s Serie A title challenge may have faded away in the final third of 2015/16, but Sarri still exceeded expectations in his first season in charge at the Stadio San Paolo.

The Partenopei registered their highest ever points total as they secured a return to the Champions League by finishing second, with the 57-year-old taking the southerners closer to top spot than Rafael Benitez had managed during his two years at the helm.

Sarri is not a manager who was always destined to reach the top: the former banker never played the game professionally and didn’t quit his day job until a decade after taking up coaching.

He worked his way up the Italian pyramid, bossing minnows Tegoleto, Sansovino and Sangiovannese in the lower leagues before moving to Serie B side Perugia in 2005. It was his impressive work during a three-year stint at Empoli that persuaded Napoli to appoint Sarri last summer, though, a move which has paid off handsomely despite the initial reservations of many of the club’s supporters – including a certain Diego Maradona.

Sarri succeeded in getting the best out of a number of key players last term, with Elseid Hysaj, Lorenzo Insigne, Kalidou Koulibaly, Allan, Jorginho and Gonzalo Higuain – who netted 36 goals in 35 top-flight appearances – all improving under his guidance and enjoying his presence. A first Scudetto since 1990 will be the target for Sarri and Napoli in 2016/17. GL

Blanc led PSG to a domestic treble of Ligue 1, Coupe de France and Coupe de la Ligue in 2016, yet even that wasn’t enough to prevent him getting the sack in June.

The reason was simple: PSG’s hugely ambitious Qatari paymasters had grown increasingly unhappy at the club’s lack of Champions League progress and decided to call time on Blanc's reign after watching PSG crash out at the quarter-final stage against a Manchester City side they were favourites to beat.

Blanc’s supposed lack of tactical acumen was again under the spotlight after he opted for an unfamiliar back three in the second leg against City, a decision that left his players looking confused. Throughout his three years in charge there was also a suspicion that player power was rife, with reports that Zlatan Ibrahimovic and others were given too much leeway.

In the end a parting became inevitable, with a feeling that successor Unai Emery's more rigorous approach is what the club needs right now. You can’t argue with Blanc’s trophy haul, though – three Ligue 1 titles, three League Cups and two French Cups, plus a Ligue 1 title and Coupe de la Ligue from his earlier spell at Bordeaux – so he will be offered gainful employment elsewhere. JE

Bradley had built quite a powerful CV in the United States, winning the league/cup double in his first season in charge of a professional side and guiding the national team to its greatest triumph 11 years later – but it's his work overseas that has caught the world's fancy and carved a path other American managers would like to follow.

The 58-year-old New Jersey native, whose coaching career began 35 years ago in America's college game, triumphed with his handling of Egypt's national team – in an explosive political landscape – during a just-miss bid to qualify for the 2014 World Cup. Then he took unfancied Stabaek to a top-three finish (and Europa Cup berth) in Norway.

It won him a spot on this list last year, and he's burnished his growing reputation since by leading Le Havre to the verge of Ligue 1 promotion – the Normandy club's finest showing since promotion to Ligue 2 eight years ago. Le club doyen, sitting fourth, got the required blowout victory in a thrilling final weekend to catch up with Metz on points, but the 5-0 romp over Bourg en Bresse left them even on goal difference with two fewer goals to their credit.

Bradley, cerebral and detail-oriented, never played above college level but he was a natural coach, finding success in the college game as an assistant to Bruce Arena – the most successful of U.S. coaches – and then taking the first-year Chicago Fire to MLS Cup and U.S. Open Cup titles 1998. His tenure as U.S. coach, from 2006 to 2011, included the 2007 CONCACAF Gold Cup crown, a stunning triumph over Spain two years later in the Confederations Cup semi-finals in South Africa, and a last-16 showing at the World Cup the following summer.

Now he's turning heads in Europe, and who'd be surprised if he's soon working in one of the big leagues, in England or on the continent? He has made it clear: Americans can coach this game. SF

It’s not easy to place Wenger in this list. Last season’s second-placed league finish didn’t do justice a grossly disappointing season in which Leicester beat Arsenal to the title by 10 points despite being bettered by the Gunners twice. The disappointing and damaging results became so frequent from late-February onwards that Wenger’s team was out of the title race two-and-a-half months early, consigned to a 12th year without the top-flight crown while Claudio Ranieri’s made history.

Despite overhauling Tottenham on the final day, there was nothing to celebrate; no chance of league success, and out prematurely in all three cup competitions. Have Arsenal really come to accept such mediocrity? For too long that has appeared the case – and Wenger’s principles have surely got in the way at times.

But there is also so much to admire about the Frenchman still, who aims to achieve with a clutch of dearly held beliefs he is adamant will one day vindicate his vision. In an environment where petrodollars devalue success, he is one of the few remaining figures with a true legacy to cherish, and his stubbornness is to be respected in many ways. Clearly, too, he is a manager players still enjoy being around – how many of his ex-players criticise him? – and an intelligent tactician who has bent to a changing game.

This may be his last year in the Gunners dugout, though, and surely the 66-year-old cannot tolerate another season of failure. It would be a sad way to bow out. JB

When West Ham decided to part company with Sam Allardyce last summer, it looked like a risk to some.

True, the football wasn’t always great, but Allardyce had guided the Hammers from the Championship to an established position in the Premier League. Bolton, Newcastle and Blackburn all went backwards after his departure, each club ultimately suffering relegation.

That West Ham made a significant step forward after Allardyce was testament to the job that Bilic did in his first season at the club. A former West Ham player, he had already developed a fine reputation as a manager after impressing in charge of the Croatian national team and helping Besiktas to victories over Tottenham and Liverpool in Europe.

His debut campaign with West Ham cemented that reputation. Bilic bought well – Dimitri Payet’s £10.7m arrival from Marseille now looks like one of the deals of the century, while Manuel Lanzini and Michail Antonio were others to impress. Early wins over Arsenal, Liverpool, Manchester City and Chelsea quickly laid down a marker, as West Ham became the exciting attacking force that their fans had desperately been craving.

That they challenged for Champions League qualification was a surprise – and even though they eventually had to settle for seventh and a place in the Europa League, that in itself was the first time they’d ever qualified directly for one of the mainstream European competitions via the league.

Bilic spent the summer dancing on tables in television studios and proving he’s one of the best pundits around. He’s a pretty decent manager too. CF