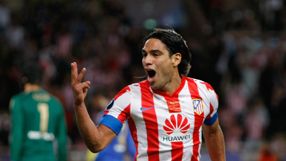 The Colombia international has emerged as one of the games most sought after strikers, having netted 10 goals in six games for the Spanish outfit already this season.

The likes of Real Madrid, Manchester City and Chelsea all showed an interest in the 26-year-old over the summer, but he ended up staying with Atletico after no concrete offers came in.

"I thought about the possibility of leaving when the club said that it would be difficult to continue if it did not get into the Champions League," Falcao was quoted as saying by Marca.

"The future was uncertain because of finances but the team made a big push and almost the entire squad stayed in the end.

"That's something that shows how well Atletico are being managed. I'm under contract for a few more years, my reality is Atletico and I can't think about anything else."

NEW ISSUE 7 reasons why Falcao is ready for the Premiership

The Spanish capital side have made a blistering start to the season and currently find themselves in second place in La Liga, two points behind early pace setters Barcelona.

Atletico have already picked up the European Super Cup, in which Falcao netted a hat-trick in the 4-1 win over Chelsea, and the former FC Porto star admits he is hungry for more silverware.

"It's what I was hoping when I signed, to make my mark, be important to the club, in the squad. To celebrate good times and titles like those we've won. We have to keep doing the same and look for new objectives," he added.

"I know that there were people who doubted me, who weren't convinced about my transfer fee. I came from Portuguese football. The mutterings were normal, the team was not in a good place and it was to be expected. I am proud to have won over the fans."