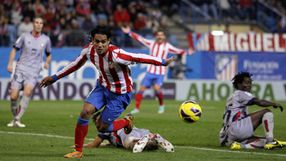 The 26-year-old is one of the hottest properties in European football and has made a prolific start to the season scoring in 11 consecutive matches for club and country helping unbeaten Atletico to join Barcelona at the top of La Liga.

"I don't even know what I'm doing tomorrow." Falcao, who is nicknamed 'el tigre' (the tiger), said when asked what he was going to do at the end of the season.

"I am happy here and enjoying things at present. I am not thinking about leaving, only in playing this season and I hope everything goes well."

Falcao, who was named on the shortlist for the FIFA World Player of the Year award on Monday, has put himself on the radar of many of Europe's top clubs after scoring a brace when Atletico won the Europa League final in May.

He also netted a hat-trick in their victory over Chelsea in the European Super Cup back in August.

"The club has needs and it depends on certain results," he said. "There are many factors. The economy of the club, entering the Champions League.

"Later, Atletico and the responsible people will decide what to do with my future. Many times the players are the last to know."

Atletico finished fifth in Spain last season to re-enter the Europa League, but currently lie second in the standings behind Barca on goal difference with 25 points from nine games.