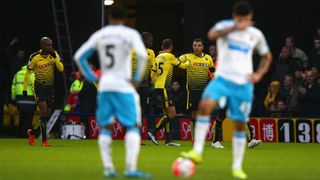 The fans have the right to be furious with Newcastle United following their FA Cup exit against Watford, according to skipper Fabricio Coloccini.

Newcastle were knocked out at the first hurdle of the competition for the fourth year in a row, and fifth time in six seasons.

Troy Deeney scored the only goal of the game as Watford secured the 1-0 win at Vicarage Road.

Coloccini said the club's supporters deserve better and are within their right to be angry.

"It’s normal because the fans have to express," he said. "They give everything for this club and they want results.

"They are unhappy and they have to know we keep trying and working hard to get those results.

"We have had some nasty results but we all want to win and turn this around. We understand them and we are working to improve things for them and for the club."

Newcastle will be looking to move out of the relegation zone but face a tough ask against Manchester United on Tuesday.