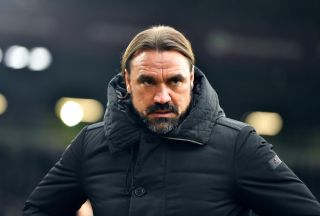 Daniel Farke says Norwich can take inspiration from Leicester’s great escape in the 2014-15 campaign, but knows they must start performing better.

The Canaries lost 3-0 at Wolves on Sunday to remain bottom of the Premier League table after 27 games, seven points from safety.

Coincidentally, Leicester were in the exact same position five seasons ago, but produced a remarkable run of wins to avoid relegation against the odds.

Ahead of facing a different Foxes side on Friday, Farke was reminded all may not be lost for his Norwich team.

“It shows that everything is possible and that’s a great example. Everyone was writing them off and then they got seven wins from their last 10,” he told the official club website.

“If I’m honest, we weren’t on our top level in the last game, so I don’t want to speak about winning seven of the next 10 games. It’s more important that we are focused on being back at the top of our game.

“What I want is that we leave our heart out on the pitch, always work and show great unity and spirit as well as tactically smart behaviour to be at the top of our game. Then everyone can say, ‘they tried everything’.”

If Norwich are to surprise Leicester on Friday and claim a much-needed win, they will have to keep James Maddison quiet.

The England international is fondly remembered at Carrow Road after hitting double figures in goals two seasons ago for the Canaries, which earned him a move to the Foxes in the summer of 2018.

“It’s thoroughly deserved that he has such a reputation here,” Farke said.

“He was and is popular because he had a fantastic development and his behaviour was always top class.

“For such a young player, he was humble and always showed his pride to wear the yellow shirt and work for this club.

“I’m sure he’ll play an important role for the Three Lions because he has so many skills and qualities and I would prefer him to be playing in a yellow shirt against Leicester, but it’s important for us to control him in order to stop their offensive play.

“It’s always great to see James because I love this guy, but from the first to the last second we will try to make his life as difficult as possible.”

Norwich will be without Onel Hernandez for the next eight weeks, after he underwent knee surgery on a meniscus problem.

He joins full-back Sam Byram on the treatment table long-term after the defender was ruled out for the rest of the Premier League season with a hamstring injury.