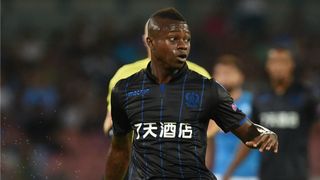 Lucien Favre says he cannot imagine Nice without Jean Seri, who is reportedly nearing a €40million move to Barcelona, although he accepts the midfielder's future is "unknown".

With Barca looking to rebuild their squad following the €222m sale of Neymar to Nice's Ligue 1 rivals Paris Saint-Germain, Seri is seemingly a top target for Ernesto Valverde.

Seri played the full 90 minutes in his side's 2-0 league win over Guingamp on Saturday, setting up Alassane Plea for the team's opening goal, and Nice coach Favre wants the Ivory Coast international to stay.

"Are you serious? I cannot imagine life without Seri," Favre said when asked if the midfielder was moving to Barca.

"But while the market is not finished, just as it is at many other clubs, everything is unknown.

"He has been very professional in all of our games. I cannot tell you anything else, I know nothing at all."

Nice president Jean-Pierre Rivere said before the Guingamp game that he has yet to receive any offers for Seri, but a pair of comprehensive defeats to rivals Real Madrid in the Supercopa de Espana was an eye-opening start to Valverde's reign and Barca are reportedly keen to add the 26-year-old to latest signing Paulinho in their squad.

Seri played down the ongoing transfer speculation linking him with Barcelona after Saturday's win, insisting he is focused on Nice's Champions League play-off against Napoli on Tuesday, with his side trailing 2-0 after the first leg in Italy.

"I'm not in contact with anyone," Seri said on Saturday. "I focus on what I have to do.

"If my agents and Barcelona see each other and talk, I don't know anything about that. If it happens, it happens. I'm still a Nice player today - and we'll see what happens later.

"It's not the time to think about it. There are a lot of things to do - notably our [Champions League] qualification - and that's the most important thing for me."