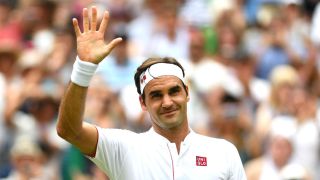 Roger Federer suggested a clash between the World Cup final and the Wimbledon men's singles final may be more of a concern for those in Russia rather than competitors at SW19.

The World Cup showpiece will take place on Sunday at 18:00 (local time), which is 16:00 BST, meaning it is likely to kick off during the men's grass-court final, which eight-time champion Federer is a heavy favourite to be a part of.

With England still in contention to reach the final in Moscow, it has been suggested the football tournament could prove a significant distraction as fans at Wimbledon try to keep up with events in the Russian capital.

But Federer offered a contrasting view in his media conference following a 6-0 7-5 6-4 fourth-round win over Adrian Mannarino on Monday.

A 15th quarter-final in his last 16 appearances at brilliant record at The Championships continues... July 9, 2018

"Well, it's going to happen anyway, if I'm going in the final or not, the Wimbledon final will take place, and so will the World Cup final," Federer said in a seemingly tongue-in-cheek response.

"I'm more concerned the World Cup final will have issues because the Wimbledon final is going on. They'll hear every point, Wow, Love-15, 15-30. The players are going to look up in the crowd and not understand what's going on at Wimbledon.

"That's how important Wimbledon is to me and to us over here. Maybe you should ask the questions over in Russia, how they're going to feel about Wimbledon being played at the same time."

Federer, who will face either Kevin Anderson or Gael Monfils in the last eight, needed just 16 minutes to wrap up the opening set against Mannarino.

Asked if he expected more from an opponent in the world's top 30, Federer said: "I think it's a tough matchup for him maybe against me. I'm not sure.

"But, sure, I was also surprised it was that fast, that first set, especially 16 minutes. That was too fast. Shouldn't really happen, but thankfully they do for me. I probably won't have another 6-0 set this week, so I'll enjoy this one."