LOS ANGELES — It probably wasn't how Benny Feilhaber planned on spending his 31st birthday, but after two years of waiting for a U.S. national team call-up, he was ready to get a lot off his chest about Jurgen Klinsmann.

The MVP finalist and Sporting Kansas City standout went last in a 20-player marathon of interviews at MLS media day, and it was Feilhaber who wound up stealing the show with a tirade aimed at Klinsmann that clearly had been building for some time.

Feilhaber has not been called up since he appeared in a February 2014 friendly against South Korea. In that time, Feilhaber has established himself as one of the best midfielders in MLS. That hasn’t changed Klinsmann’s decision to keep leaving Feilhaber out of the national team picture.

“I’ve accepted the fact that Jurgen’s not going to call me,” Feilhaber said. “If I played the year that I played this last year and I’m not getting the call, I’m not going to get an opportunity under Jurgen. That’s something I just have to accept.

“I wouldn’t say [it's] frustrating, just almost sad,” he added. “I feel like I’m playing the best soccer of my career, but I don’t get the opportunity to play for my country.”

Feilhaber, who compiled 10 goals and 15 assists during the 2015 regular season, proceeded to rattle off players from what he felt was a pattern of Klinsmann snubbing deserved MLS standouts.

“Look at some of the top players that played this year: You take a Sacha Kljestan, you take a Dax McCarty, you take a Matt Hedges, and I’m sure you can go on and on,” Feilhaber said. “These guys aren’t getting an opportunity. It’s not just me. There’s people like that, but there’s people in Europe as well. ... An Eric Lichaj, for example — he’s been playing well in Europe for countless years and he hasn’t really been given an opportunity either.” 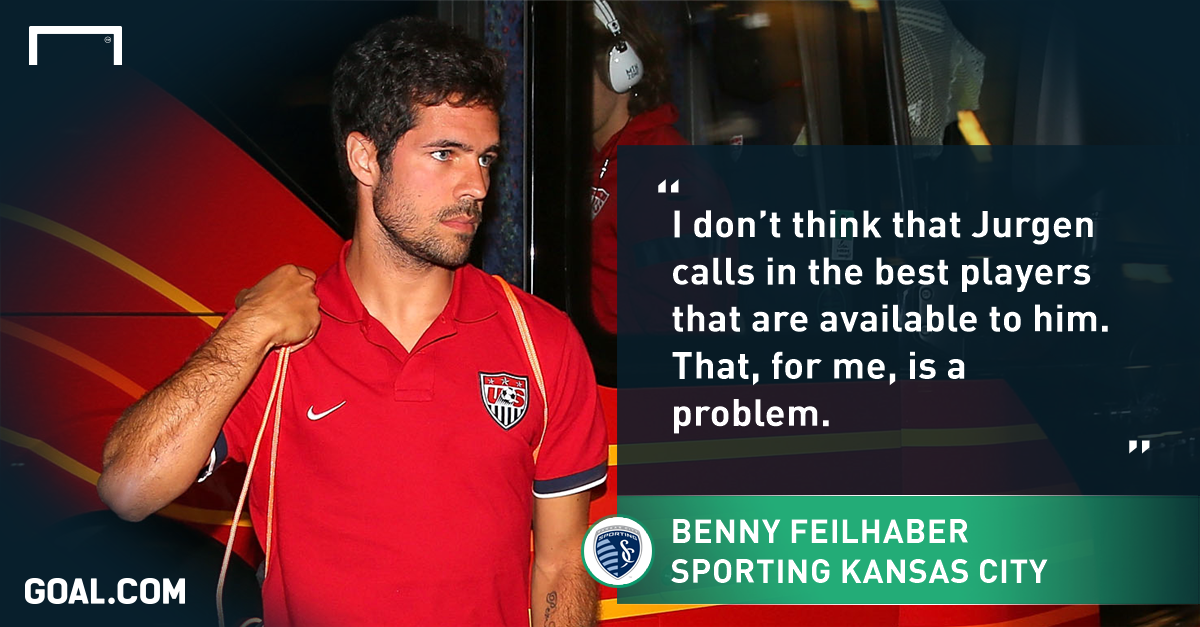 Feilhaber not only took issue with Klinsmann’s player choices, but also the way the U.S. coach is building his team. The midfielder's comments come after a 2015 that saw the U.S. finish fourth at the CONCACAF Gold Cup while starting the youthful center back duo of John Brooks and Ventura Alvarado, then fall to Mexico in a Confederations Cup playoff.

“In regards to how a coach should approach a team — not just a national team, but just any team — there’s obviously two duties,” Feilhaber said. “One is making the best possible team you can possibly make with the players that are available to you. Two is to try and continuously improve that team so that team doesn’t stall in any way and continues to improve.

“For me, Jurgen seems to try and do the second one without doing the first one. He’d rather put young guys on the team that potentially could become someone important on the team, and he leaves out players that could make the team better right now.

“Is it a problem for the national team? I would think so. I would think that any national team fan would want the best players at that camp. And maybe there’s plenty of people that don’t think I’m good enough to play on the national team, and that’s fine. But there are plenty of other players out there that you can raise an eyebrow to say, ‘Well, I feel like he’s playing pretty well to at least get an opportunity,' but they don’t for whatever reason.’

When pressed for specific examples other than himself, Feilhaber elaborated on the merits of fellow MLS Best XI selection McCarty, who is coming off a career year as captain of the Supporters' Shield-winning New York Red Bulls.

“I can see how Dax McCarty can help the national team,” Feilhaber said. “He plays in a position that, in my opinion, would help Michael Bradley become a better player. I’m not going to detail everything, but Dax is a guy that can sit in that pocket and allow Michael Bradley to operate in front of him, and I think he does it in a way that is probably better than, or at least competes with, guys trying to do the same thing on the national team right now.”

Feilhaber’s decision to speak out against Klinsmann made it clear he has given up hope of a return to the national team, for which he has made 41 appearances — at least as long as Klinsmann is the coach.

“I’m sure just like myself, those other players that I’ve told you, they realize that, ‘Look, it doesn’t matter how well I play, I’m not going to get called in,’” Feilhaber said. “For them, personally, they think, ‘That’s OK, I can accept it.' It’s not something that I can change. It’s just something that is how it is.”

Klinsmann: Feilhaber didn't show he was on 'international level'

Quiz! Can you name the XIs that Clarence Seedorf won the Champions League with?