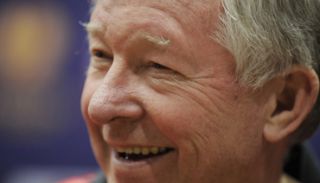 Photographs of the 71-year-old Scot, who will retire at the end of the season after a glittering reign at Old Trafford, were plastered on the front and back pages of most newspapers.

The front page of mass selling tabloid The Sun displayed a red hairdryer hanging from a hook - a reference to Ferguson's infamous "hairdryer" treatment.

The Daily Mirror's back page moved the story on with a picture of a smiling Everton manager David Moyes, Ferguson's likely successor, underneath a headline "The Chosen One".

The Sun's first seven pages were devoted to British football's most successful manager while a 12-page pull-out detailed his remarkable career in words and photos.

Among the forest of eulogies to Ferguson's remarkable impact on the football landscape was one by the Daily Mail's Martin Samuel which summed up Ferguson's genius as "being able to mine the hunger of garlanded millionaires".

The Times columnist Simon Barnes described Ferguson as having an "appetite for victory that could never be satisfied."

"Like Trafalgar Square without Nelson," was Daily Telegraph writer Henry Winter's neat summing up of life after Ferguson.

Others said Ferguson's exit would leave a "yawning vacuum" and looked at the task facing the next United manager.

Debate raged over which of Ferguson's teams were the best, with some pundits choosing the 1998/99 selection that won the Champions League, Premier League and FA Cup and others going for the Eric Cantona inspired vintage of 1993/94.

The impact on United of Ferguson's move to an upstairs boardroom position was the subject of much conjecture.

While Moyes appears almost certain to be named as Ferguson's successor, an article in The Times said United were taking a "sizeable gamble" in the 50-year-old Scot who has never won a trophy in 11 years at Goodison Park.