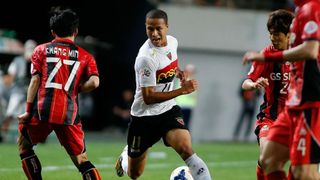 A South Korean footballer who was given a six-month ban for a doping violation he blamed on moustache-growing cream has seen FIFA appeal to the Court of Arbitration for Sport (CAS) to have his sanction extended to two years.

Kang Soo-il was found to have the banned steroid methyltestosterone in his system just a few hours before he was due to make his senior debut for South Korea against United Arab Emirates in June last year.

The Jeju United forward was subsequently sanctioned by the Korean Football Association, and did not contest the ban, which he reportedly put down to using a supplement designed to help him grow facial hair.

But CAS has now confirmed that they will review the case on February 5, following an appeal from FIFA.

"I am sorry for the fans who had high expectations of me," Kang told reporters at the time of his original punishment. "I feel sad … and disappointed with myself because I had no knowledge about what a professional player should know naturally."