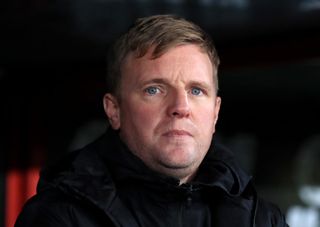 Under-pressure Bournemouth boss Eddie Howe insists he is not a spent force and can handle adversity due to being written off “hundreds of times” during his injury-ravaged playing career.

The Premier League’s longest serving manager has come under increased scrutiny following a dismal run of form which has heightened the Cherries’ relegation fears.

Howe has guaranteed status as a Bournemouth great having guided the club from the lower reaches of Sky Bet League Two to the top flight over the course of two spells after being forced to hang up his boots aged 29 because of a persistent knee problem.

The 42-year-old is convinced he possesses sufficient drive and ideas to halt the decline and lead the Cherries forward but is also eager to avoid appearing deluded about the severity of the current predicament.

“As a player, I’ve been in this position hundreds of times – written off, not good enough, injured for two years, sat in a treatment room with no idea when I was going to be fit or kick a ball again,” said Howe.

“This isn’t new territory for me, trying to prove people wrong and trying to lift the team.

“My energy levels – I would know deep down if I was spent, if the creativity juices weren’t going.

“I don’t want to be deluded either. I don’t want to say everything’s great, I’m great, when the results say the opposite, so I’m not in that position either.

“I’m just working as hard and as smart as I can to try and change results.”

Ahead of Saturday’s trip to bottom club Norwich, Howe said there was no truth in suggestions he has been asked to resign as manager.

A run of nine defeats from 11 games has left Bournemouth languishing just one place above the Canaries.

The struggling Cherries have also failed to score in six of their last eight top-flight fixtures and, alongside Crystal Palace and Watford, have registered the fewest goals in the division.

Initially in charge of the south coast club between 2009 and 2011, Howe returned in October 2012 following a brief spell with Burnley.

He has attracted little criticism during his time at the Vitality Stadium but feels there have been plenty of bumps in the road before the present slump.

“In a sense from the outside you look at it and go everything’s always been rosy at Bournemouth, everything’s been easy – far, far from it, on so many different levels,” said Howe.

“The first few months here (as manager), were just incredibly difficult – League Two, looking like we’re going to the Conference, in a huge relegation battle where we were seven points cut adrift at the bottom, so I’ve been in this position loads.

“The reality is a couple of results and things look very different and you (the media) are probably at a different club asking negative questions.”