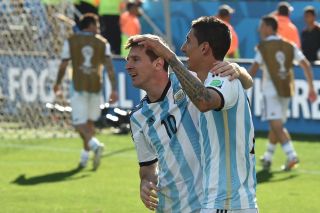 FIFA announced the shortlist on Friday, together with the three nominees for the respective Golden Glove and Young Player gongs.

Four Germany stars are in contention for the Golden Ball, with Thomas Muller - scorer of five goals in Brazil - joined by Toni Kroos, Mats Hummels and captain Philipp Lahm.

Argentina are represented by Lionel Messi, Angel di Maria and Javier Mascherano, while the remaining three nominees come from teams whose tournament hopes have been dashed.

Brazil talisman Neymar, who suffered a high-profile back injury that ruled him out of his nation's 7-1 drubbing at the hands of Germany in the last four, and Arjen Robben of the Netherlands make the list, together with Colombia playmaker James Rodriguez, currently the tournament's leading scorer with six goals.

Germany and Argentina also have candidates for the Golden Glove prize, to be awarded to the World Cup's best goalkeeper, in the form of Manuel Neuer and Sergio Romero.

Keylor Navas, the Costa Rica keeper who played a major role in his side's surprise run to the quarter-finals, is the other nominee.

The Young Player Award is given to the best player born on or after January 1, 1993.

Two France players - Paul Pogba and Raphael Varane - are in contention for the prize alongside Netherlands winger Memphis Depay.