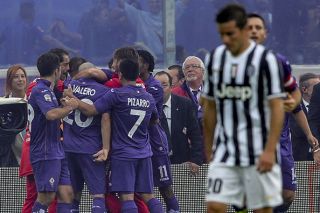 The defending Serie A champions took a 2-0 lead into the break at Stadio Artemio Franchi on Sunday before Fiorentina hit back.

Giuseppe Rossi, who was almost substituted during the first half, scored a hat-trick to go with a Joaquin strike for the hosts.

Montella said his side, who are sixth in the league after the win, proved they could challenge the best teams.

"Today's victory is important for the league table. It was a special match to play against Juventus and therefore it's a special victory," Montella said.

"I believe this victory will increase our self-confidence and the belief that we can do great things. This is the most important meaning of this victory.

"If the result had been different, it would have been more difficult for the group to feel this way and have the confidence we have.

"This victory allows us to understand that we can battle against any team and challenge in the league."

Rossi almost came off in the first half but told Montella he wanted to stay on the pitch.

The coach warned Rossi he needed to do more and he did, scoring a 15-minute hat-trick in the second half, including a penalty, a left-footed strike from range and a good finish in a one-on-one.

"In the first half, I thought a lot about taking Rossi off the pitch because he wasn't feeling right and it was visible," the 39-year-old coach said.

"He decided he didn't want to go off the pitch.

"I made one last effort to sub him by the end of the first half of the match but he said he was OK and so I told him that he had to do more if he was feeling right and he did just that."

Despite Rossi's standout performance, Montella said the win was a credit to his whole team.

"I believe that such matches can only be won thanks to the collective work of the team. Today all the Fiorentina players on the pitch put in an excellent performance," Montella said.

"The players on the bench boosted the other players and made them work harder. In such matches, everyone has to be praised. It was a great result."