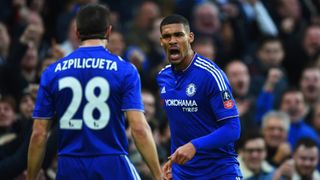 Chelsea midfielder Ruben Loftus-Cheek was thrilled to open his goalscoring account for the club in their FA Cup third-round win over Scunthorpe United at Stamford Bridge.

The 19-year-old netted with a left-footed finish in the second half to add to Diego Costa's early goal in a 2-0 win for Guus Hiddink's side against their League One opponents.

The goal from half-time substitute Loftus-Cheek was his first shot on target in 11 Chelsea appearances and he was delighted with his accomplishment after the match.

"It was a really nice moment," he said to BT Sport. "My first goal so I am really, really happy with that. But just to come on and play 45 minutes is amazing.

Loftus-Cheek had praise for new boss Hiddink, who is undefeated in four matches since replacing the sacked Jose Mourinho as manager.

"I am really pleased to play for him," the teenager said. "He is a nice man and a good manager.

"It was a real battle. They came here with massive motivation and we had to match that. We knew if we matched them then our quality would come through."

Chelsea return to Premier League action with a home game against West Brom on Wednesday.