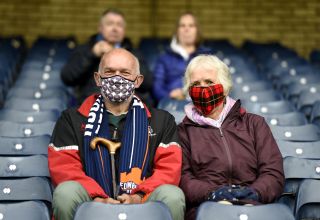 The return of Scottish sports fans is likely to be delayed again but First Minister Nicola Sturgeon played down suggestions that increased restrictions could be in place for six months.

Sturgeon announced that relaxations earmarked for October 5 were unlikely to be introduced.

That includes the return of sports fans, which had already been pushed back for at least three weeks.

However, Sturgeon would not follow Prime Minister Boris Johnson’s warning that new measures could be in place for “perhaps six months”, as he scrapped plans to allow supporters back into English stadiums from October 1.

After announcing a 10pm curfew for hospitality venues and the extension of restrictions on household interaction across the country, Sturgeon told the Scottish Parliament: “It’s important that I indicate, in light of the current situation, that the route map changes with an indicative date of October 5, are unlikely now to go ahead on that time scale.”

Sturgeon addressed talk of restrictions being in place for six months following earlier announcements from the UK Government and medical officers for England.

“It is certainly the case that, until significant developments such as a vaccine change the game in the battle against Covid, it will have a continuing impact on people’s lives,” she said.

“But that doesn’t necessarily mean that all of the new restrictions I am announcing will be in place for six months.

“By acting early and substantially, our hope is that these new measures will be in place for a shorter period than would be the case if we waited longer to act.

“In the first instance we will review these measures in three weeks, although given the nature of this virus, it is important to be clear that they may be needed for longer than that.”

Test events with about 300 socially-distanced fans have taken place at BT Murrayfield during an Edinburgh-Glasgow encounter, and in the Scottish Premiership hosted by Aberdeen and Ross County.

However, plans for further trial runs were shelved after a rise in Covid-19 cases. The latest 24-hour periods saw 383 positive tests, the highest figure since April 18.

Rangers boss Steven Gerrard added his name to the chorus of disappointment following the announcements.

Gerrard – who is in Holland preparing for Rangers’ Europa League qualifier against Willem II – said: “It’s a massive blow. It’s not the news that anyone who loves the game or who is connected to our club wanted to hear.

“Football is not the same at the moment. I don’t think anyone enjoys it as much as when we have fans in the stadium, especially when you’re on the eve of situations like we’re in at the moment.

“Coming away to places in Europe should be about playing in front of really exciting atmospheres and really making the game more special than it is.

“So it’s not the news that anyone wanted. It’s a massive blow for us and the Scottish game.