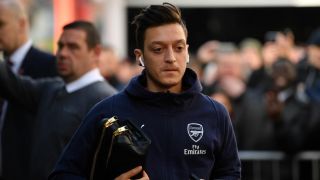 Mesut Ozil has returned to full training and is in line to make his Arsenal return in Thursday's Europa League clash with Qarabag at Emirates Stadium.

Arsenal confirmed on Wednesday that the former Germany international is back in contention for Unai Emery's side after recovering from a back injury which has kept him out since last month's Premier League win over Bournemouth.

Ozil missed matches against Vorskla, Tottenham, Manchester United and Huddersfield Town after sustaining the problem – Arsenal picking up three wins and a draw to extend their unbeaten run to 21 matches in all competitions.

But the 30-year-old is now available to return, along with Aaron Ramsey (ankle), who was absent from Saturday's late 1-0 win over Huddersfield.

Shkodran Mustafi (hamstring), who came off in the second half of that game, remains a doubt and will be assessed ahead of the clash with Qarabag, who are bottom of a Group E table where Arsenal are already confirmed as pool winners.

Here's our official team news ahead of tomorrow’s game…December 12, 2018