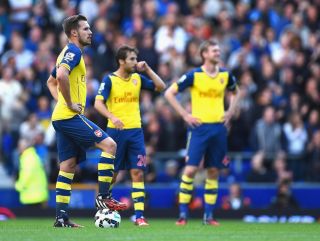 Arsene Wenger's side received heavy defeats at the hands of champions Manchester City and fellow title chasers Liverpool and Chelsea in 2013-14.

They appeared to be on course for a repeat dose as Seamus Coleman and Steven Naismith handed Everton a 2-0 half-time lead, with Arsenal labouring on that back of their midweek exertions in Turkey against Besiktas.

But Aaron Ramsey reduced the arrears with seven minutes remaining before Olivier Giroud - on at half-time for a disappointing Alexis Sanchez - headed home Nacho Monreal's cross in the final minute of normal time.

"We'll say it's a great performance because we were 2-0 down. It was great spirit from the boys because it was not easy," Flamini told Sky Sports

"At half-time the manager said there was space to create opportunities and we believed we could do it.

"We have learned a lot from last year from when we were playing against these top teams.

"We didn't give up until the last second and that was important. This is a game to remember for us."

But Wenger sounded a note of caution ahead of the return leg against Besiktas - into which Arsenal take a goalless draw - as he revealed Giroud is an injury doubt following an incident in stoppage time.

"It was a stretched ankle, at the moment it doesn't look too good," he told Sky Sports.

On the game itself, Wenger joined Flamini in praising Arsenal’s character.

"We have a great response with complete desire to come back and the spirit was fantastic," he said.

"In the end we got back to 2-2 and we got a strong point but a deserved one if you look at the chances we had, especially in the second half. We came back very late but our spirit got us a point.

"It shows the belief and the resilience is there. The second goal was offside but we took it on the chin and came back."