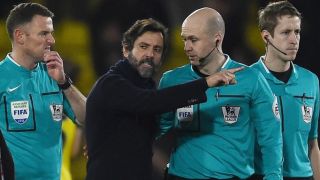 Flores' men were on a run of four successive wins in the Premier League before a 2-2 draw against Chelsea last week.

Watford then suffered a last-gasp defeat against Tottenham, which has seen them slip down to ninth in the table.

However, Watford conceded goals in both of those games with clear offsides in the lead-up play, and Flores has called on the assistant referees to be more focused.

"The only thing I am a little worried about is we are working very well with our defensive line," Flores said ahead of the side's clash with Manchester City on Saturday.

"It is always compact and we keep the line well. But in the last two matches there have been little problems with the goals we conceded.

"But we need the linesman to be completely focused because otherwise our work is not valid.

"We work very hard on the line only for players who are offside to get a goal. That is difficult for us.

"So I am very happy with the work of the referee and the linesman but they must know how we work. If they get it wrong then for us it is a disaster."