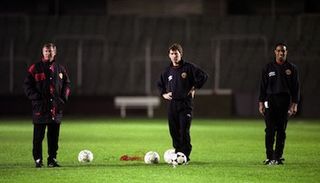 David Gill, Manchester United chief executive, in a statement: "We knew that his retirement would come one day and we both have been planning for it by ensuring the quality of the squad and club structures are in first-class condition. What he has done for this club and for the game in general will never be forgotten. It has been the greatest experience of my working life being alongside Alex and a great honour to be able to call him a friend."

Joel Glazer, Manchester United co-owner, in a statement: "Alex has proven time and time again what a fantastic manager he is but he's also a wonderful person. His determination to succeed and dedication to the club have been truly remarkable. I will always cherish the wonderful memories he has given us, like that magical night in Moscow [2008 Champions League final win]."

Sepp Blatter, FIFA President, on Twitter: "His achievements in the game place him without doubt as one of the greats. Was [an] honour to present Sir Alex with award at 2011 Ballon D'Or. Will his longevity at the top ever be repeated?"

Michel Platini, UEFA President, on uefa.com website: "Sir Alex has made a massive contribution to football, not only in Scotland and in England but across Europe and beyond. His dedication, his attention to detail and his unique eye for talent, as both the manager of Manchester United FC and Aberdeen FC, has brought rich rewards over a 30-year period. His CV is almost unique in a results-based profession that normally focuses on short-term solutions rather than long-term vision.

"He is a true visionary and I hope that, having helped us in the past through various coaching initiatives, he will continue to collaborate with UEFA to share his fantastic knowledge with the next generation of up-and-coming European coaches who all wish to emulate his achievements in the sport."

Richard Scudamore, Premier League chief executive, on Sky Sports News: "You know it's one of those things you know is going to happen one day but you never really expect it to happen. It's a big shock. [The Premier League's] absolute leading club and its standard-bearing club has been Manchester United...nobody has been a bigger star on our stage than Sir Alex Ferguson... it's an unbelievable footprint he's made on the Premier League."

Gordon Taylor, chairman of the Professional Footballers' Association (PFA), to local media: "The game of football will be a lot poorer place without him. He has been quite simply the best. He followed in Sir Matt Busby's footsteps and even surpassed him. He will be also be the toughest act to follow. I will miss him - he has been a very good friend of the PFA throughout his career. Of course at times it has not always been smooth and we have had a difference of opinion but we always respected each other and we have had a lot more agreements than disagreements."

David Bernstein, chairman of the Football Association, on the fa.com website: "Sir Alex Ferguson's achievements are truly remarkable - he is genuinely one of the greatest managers of all time and certainly of the modern era. His contribution to English football has been outstanding in every regard and, in The FA's 150th year, it is something that should be celebrated. On behalf of The FA I'd like to wish him a happy and healthy retirement."

Howard Wilkinson, chairman of the League Managers Association, in a statement: "Today's news draws to a close the career of a man and a manager, the lik