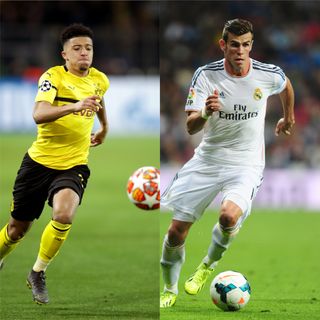 Manchester United have inched closer to signing Jadon Sancho, with Borussia Dortmund willing to agree to an initial fee, The Independent reports. Dortmund are said to have agreed to a base fee of £60million, which would ultimately rise to more than £100m. The Bundesliga club had seemed ready to play hardball over the 20-year-old, but are now thought to favour a rapid resolution to the transfer as they prepare for next season. United are the clear front-runners, with Liverpool and Real Madrid having dropped off.

Gareth Bale intends to stay at Real Madrid despite being shunned by Zinedine Zidane, the Daily Mirror reports. Bale did not feature at all in the LaLiga champions’ last seven games. He was an unused substitute on the bench, and has come in for heavy criticism from Real supporters. Still, he has told Wales boss Ryan Giggs he wants to stay at the club despite the fear he could be short on game time before next year’s Euros.

Leeds are planning on signing Everton midfielder Fabian Delph and Tottenham full-back Danny Rose – both 30 – ahead of their first season back in the Premier League, according to the Daily Mail. Manager Marcelo Bielsa is keen to lure players with top-flight experience, and has been handed significant funds by chairman Andrea Radrizzani to strengthen his squad. Both Delph and Rose began their careers at Elland Road.

Mesut Ozil has no intention of leaving Arsenal despite falling out of favour with Mikel Arteta, the Daily Mail reports. The 31-year-old has not played a minute of football since the restart of the season. The official reason is a back injury, but sources say he is not in Arteta’s ideal first XI in any case. Still, the German would prefer to see out his £350,000-a-week contract – which runs through next year – rather than look elsewhere, his agent says.

Alexis Sanchez looks set to finally leave Manchester United’s books, with Inter Milan moving to make his loan spell permanent, the Manchester evening News reports. Inter are currently paying 75 per cent of his £400,000-a-week wage. United would prefer to make that 100 per cent, with no prospect of Sanchez returning to the club where he proved such a disappointment, and have been pushing for Inter to sign him.

Lloyd Kelly: The 21-year-old defender could be on his way from Bournemouth to Liverpool, the Daily Express reports.