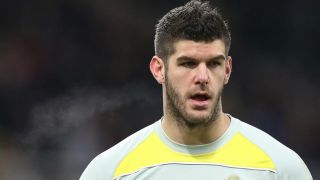 Southampton goalkeeper Fraser Forster could not wipe the smile off his face after he was back in full training on Tuesday.

Forster has been sidelined since March after undergoing surgery on a damaged patellar tendon on his left knee sustained against Burnley, but the England international finally completed his first full session at Staplewood.

The 27-year-old, who is still some way off a competitive return with a New Year comeback likely, told Southampton's official YouTube channel: "I'm delighted – obviously a lot of hard work has gone in to get back to this point and I'm thrilled to be out there with the lads.

"I'm so grateful to the physios and everyone for the work they've put in over the last eight months – I'm absolutely buzzing.

"This is obviously what you aim for as soon as you get injured. It has been a long one mentally, but I’ve been fortunate enough to be at a club where we have got great physios and great medical staff.

"I've put in a lot of time in the treatment room and the gym, so I'm grateful to everyone has helped me back to this point."

Forster added: "I feel good – I feel good physically which is the main thing. It'll take a bit of time to get up to speed, but every day I will get better and better, so I'm just buzzing to be out there.

"I've got to take it day-by-day and see how I get on. I think I'll play some under-21 football in the New Year and we'll go from there."