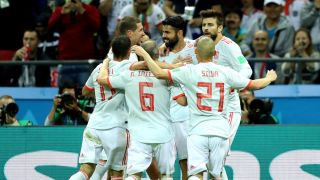 Carlos Queiroz could not have been more courteous in his evaluation of Fernando Hierro's Spain when describing them as "Supermen", but after Iran's 1-0 defeat to La Roja in Kazan the Portuguese coach was left ruing bad luck as his own team's kryptonite.

Queiroz had no doubt about the size of the task facing his side when he spoke to the international media on Tuesday, accepting "Iran don't have supermen like Spain, but we can do super things" as he plotted the unlikely downfall of a team battling suggestions of crisis.

For the most part Iran did exactly those "super things" on Wednesday, as they dug deep, held firm and limited Spain's flow of chances. It wasn't pretty, but for long periods it was effective.

Even off the pitch, Iran were astounding.

Spain had to contend with more than just a well-drilled and fierce team of opponents – they were also playing against the crowd.

A reported 15,000 Iranians made the trip to Kazan and, judging from the deafening, continuous humming of air horns and whistles inside the stadium, each and every one of them – plus some locals cheering on Rubin star Sardar Azmoun – was crammed into the arena.

A brief lull, which lasted about 20 seconds in the 17th minute, was soon drowned out again as Spain transitioned again from defence to attack, penning their opponents into their own defensive third.

Back came the horns, as if convinced the noise would put La Roja off – an uncharacteristically wayward pass from Andres Iniesta in the 33rd minute suggesting it was having an impact.

Spain's midfield probed endlessly, pulling Iran this way and that as they attempted to plot a way through a seemingly endless sea of defenders – an experience their vastly outnumbered fans will have had to endure in the city during the day.

Much of the build-up to this match was focused on an apparent lack of unity in the Spain side, following on from Julen Lopetegui's shock sacking last week, although Iniesta insisted such reports were nonsense in his pre-match news conference.

Nothing in their play suggested a lack of cohesion or any hint of a schism. In fact, the manner of their return to the pitch for the second half - with players closely grouped together and patting each other on the back - gave every indication they were just as united as ever. They "blindly trust" each other, as Iniesta said on Tuesday.

Iran just made it difficult.

Spain began the second period more impressively and their efforts were ultimately rewarded as fortune played its part – Ramin Rezaeian's clearance crashing against the shin of Diego Costa and finding the bottom-left corner.

If that wasn't enough, fortune aimed an even bigger grin in Spain's direction just after the hour – a VAR review chalking off an Iran equaliser due to Saeid Ezatolahi straying offside just prior to blasting past David de Gea.

For all the chatter about the technology at this tournament, one thing was clear from Spain's perspective; it saved them a huge embarrassment here.

The end of the contest saw Spain's performance become near unrecognisable.

Loose passes were frequent, while they looked nervous and agitated on the ball, the incredible noise in the stadium turning up a few notches with every hope-inspiring mistake.

But while lady luck smiled on Spain, the same was not to be said for Iran, whose efforts went unrewarded – Spain left breathing a collective sigh of relief on a day they were far from "Supermen".