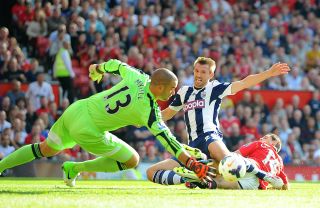 With Foster sidelined since the end of August after suffering a fractured foot, Myhill has stepped out of the shadows and featured in a run of games that has included a 2-1 win over Manchester United at Old Trafford and a 1-1 home draw with Arsenal last Sunday.

The Wales international has waited patiently for first-team opportunities since joining from Hull City in July 2010, making 27 appearances in all competitions.

And Foster is pleased to see the 30-year-old enjoy his moment in the limelight.

"Everybody has been delighted with him and rightly so," Foster told the club's official website. "I've watched every game while I've been injured and I've been very impressed by him.

"I get to see him day in and day out in training so it's no surprise to me.

"He's an international goalkeeper and you’ve got no worries with him.

"We've needed him as well.

"There have been times in the last couple of games where he's made saves and if the opposition had scored they would have been completely different games.

"You have to take the opportunity with both hands and Boaz is doing really well at the moment."

Foster, also 30, is midway through a 12-week spell out of action and has reported that his rehabilitation is going to plan.

He said: "It's going well and I've just started to put weight on it.

"I have been limited in what I can do in the gym since the operation but things should start to pick up again now."