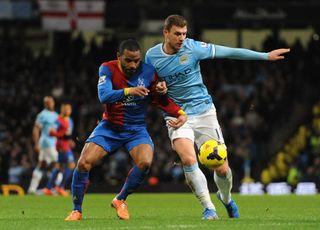 Tony Pulis' men have already had an impact on the enthralling three-way battle for the English top flight crown, beating second-placed Chelsea 1-0 at Selhurst Park.

Leaders Liverpool have been top of the table since that shock win for Pulis' side and have a five-point lead over Chelsea, while City, who have a game in hand on the top two, are a further point back.

Palace host Liverpool a week on Monday in their final home game of the season and Brendan Rodgers' men will hope that the London club can do them another favour beforehand, when they welcome City to Selhurst Park in the midst of a rich vein of form.

Palace head into the contest on the back of five straight wins, a run that started with their victory over Chelsea.

City, who are striving to secure a second Premier League title in three seasons, will kick-off in south London with the chance to cut the gap to Liverpool to three points should Chelsea win at Anfield earlier in the day.

However, City manager Manuel Pellegrini knows taking all three points will be no easy feat against a side that were unfortunate to suffer a 1-0 defeat in the reverse fixture in December.

"The players here still believe (City can win the title)," Pellegrini said. "I think everyone who works in football knows everything can happen.

"It will be a very difficult game, as it was when they played them (Palace) at the Etihad in December. We will have play well if we want to win.

"Tony Pulis is doing a very good job - Palace have been one of the best teams in the second half of the season and I congratulate him."

The visitors will be without playmaker David Silva after he aggravated an ankle injury in the 3-1 win over West Brom on Monday, while Jesus Navas (ankle) and Matija Nastasic (knee) are also on the sidelines.

But City will be boosted by the prospective return of midfielder Yaya Toure from a thigh injury sustained in the 3-2 loss at Liverpool 12 days ago.

Palace striker Marouane Chamakh and midfielder Kagisho Dikgacoi are both rated as doubtful by Pulis, who insists that his side will need no motivating in their final two home games against City and Liverpool, despite being assured of safety.

"I think we have a responsibility to the Premier League and the rest of the teams we give it the best we can," Pulis said.

"We're playing in the best league in the world so it's very, very important we set our sights to do as well as we can. We know the two games at home are going to be difficult against two top teams."