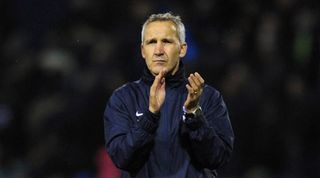 Palace's start to the season has descended into chaos after manager Tony Pulis left the club by mutual consent on the eve of their Premier League opener at Arsenal last Saturday.

Glenn Hoddle reportedly turned down an approach to hold talks over the vacancy at Selhurst Park, and then Malky Mackay looked set to be appointed before another dramatic twist of events.

The Football Association confirmed on Thursday that they are to investigate claims of misconduct made by Cardiff City against their former manager Mackay and head of recruitment Iain Moody.

Moody resigned from his role as Palace sporting director on Thursday and Palace's search for a new boss goes on, so caretaker Millen will remain at the helm for this weekend's London derby against West Ham.

Millen admits the uncertainty surrounding the club is a distraction, but does not expect it to impact on Palace's performance in their first home game of the season.

When asked how recent events have affected the Palace players, he said: "To be fair it's been okay. On the training field it's been fine, when we start work they're serious, they're focused.

"It's not ideal, [of] course it's not, they're waiting to see which direction the club is going in, but the players are focused.

"I don't think it weakens us no, they're the same group of players, they trust me. We've done our homework on West Ham as we know we've got a tough game so the set-up is here - there's no excuses."

Winger Jason Puncheon will play no part as he serves a one-match ban following his red card in the 2-1 defeat at Arsenal, but Jonny Williams and Jerome Thomas could return from injury.

Defenders Scott Dann (thigh) and Adrian Mariappa (rib) will be assessed ahead of the game.

And manager Sam Allardyce is braced for another testing encounter despite Palace's predicament.

He said: "You just have to look at the way they played against Arsenal - they were thoroughly professional and in many ways were very unfortunate to lose the game away from home at the Emirates, which is a big result for anybody, whether they have a manager or not.

Allardyce will be without James Collins after he was dismissed against Tottenham and fellow defender James Tomkins (hamstring) is a major doubt, so Winston Reid could be his only available centre-back.

New strike duo Enner Valencia and Diafra Sakho are building up their fitness, and Allardyce remains unsure if either will feature at Palace.