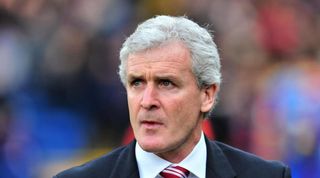 Hull's first ever European campaign has generated a feel-good factor in east Yorkshire and Steve Bruce's men started the Premier League season with a 1-0 win at QPR last week.

A much-changed side did lose 1-0 to Lokeren in the first leg of their UEFA Europa League play-off on Thursday but Hull will still be hopeful of progression with the home leg to come.

Stoke suffered a 1-0 loss to Aston Villa at the Britannia Stadium on Saturday but have had the entire week to prepare for their trip to Hull, and Hughes thinks being the visitors on this occasion will help them.

"Playing away from home may possibly may play into our hands a little bit," Hughes told Stoke's official website.

"It's a very difficult fixture for us because they will be on a high having recorded a good away win against Queens Park Rangers on the opening day.

"They will be looking at this, their first home game, as chance to put on a show for their supporters, but that may cause them a few issues if we are able to start the game strong.

"We may look to play on that if we are able to do so and make them feel a little bit anxious."

Much has been expected of Stoke's new-look attackers Bojan and Mame Biram Diouf after an impressive pre-season for each, but both struggled against Villa.

How Hughes integrates his new signings may be crucial in Stoke's early-season form and winger Victor Moses, who joined on a season-long loan from Chelsea last week, could make his debut on Sunday.

Hughes might be without Stephen Ireland's services, however, as the midfielder recovers from a rib injury.

Stoke have lost on just one of their six trips to the KC Stadium. Their last win there came courtesy of goals from Ricardo Fuller and Liam Lawrence, who sealed a 2-1 triumph in May 2009.

Bruce is expected to make wholesale changes, with just two of the team that started against QPR featuring from the beginning in Belgium.

Goalkeeper Allan McGregor will be determined to atone from his howler which cost Hull against Lokeren, but the Scotland international has credit in the bank after his penalty save at Loftus Road last week.

Winger Robert Snodgrass (knee) and Yannick Sagbo (suspension) will miss out for Hull, who have not won two league matches in a row since September last year.

The two Premier League matches between the sides last term featured just one goal, scored by Stoke's Peter Odemwingie, and another low-scoring affair could be on the cards.