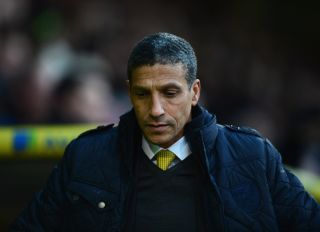 The Carrow Road side head into the game in woeful form, having gone eight games without a win in all competitions.

Norwich were beaten 3-0 by fellow Premier League strugglers Fulham in an FA Cup third-round replay on Tuesday and will face a Hull side boosted by the signing of striker Nikica Jelavic from Everton.

The Croatia international became Steve Bruce's first signing of the January transfer window on Wednesday, with Shane Long in line to become the second after Hull agreed a fee with West Brom for the forward.

Former Rangers man Jelavic goes straight into the squad for this weekend's game as the Yorkshire club aim to do the double over Norwich following a 1-0 home win in August.

Jelavic bolsters a side that has won only three of their last 15 Premier League encounters as they seek to avoid an immediate return to the Championship following promotion last season.

Indeed, Norwich can move level with 10th-placed Hull - who sit five points above the relegation zone - by claiming victory.

Hull boss Bruce has no new injury concerns for the game, with Sone Aluko (Achilles), Robbie Brady (groin) and Paul McShane (ankle) his only absentees.

Norwich could hand a debut to midfielder Jonas Gutierrez, signed on loan from Newcastle United on Monday, while Alexander Tettey and Anthony Pilkington both return from injury.

Defender Michael Turner remains on the sidelines with an ankle problem, and Jonny Howson (back) and Elliot Bennett (knee) also miss out.

Norwich's last victory came on December 7 with a 2-0 triumph at West Brom, but Hughton is confident his squad have what it takes to get back to winning ways.

He said: "Do I have faith in this group of players? Yes.

"There wouldn't be anybody in the changing room that hasn't had to cope with more difficult times or a period in their career where they haven't got the results they wanted to."